THEY FELL LIKE STONES: Isandlwana (Folio)1759 Siege of Quebec (2nd Edition)
Back to: Colonial Wars 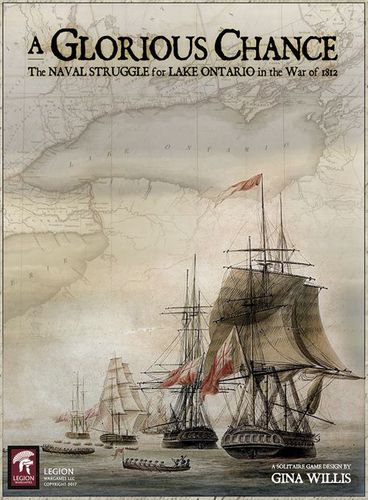 A Glorious Chance is a solitaire, operational wargame that puts you in command of the U.S. or British naval squadron on Lake Ontario in 1813. You have four months to dominate the lake. But each patrol, each convoy mission, each amphibious landing you make to pursue victory risks full-scale battle with the enemy squadron - a battle that could leave you triumphant or shattered in a matter of hours. A dynamic card-driven AI opponent assigns British missions, refits and launches new ships, and plots raids on your supply routes and coastlines.

A Glorious Chance has eight turns representing the period June-September 1813, and is playable in about four hours. Each turn, the human player assigns friendly ships or stacks to patrol, convoy escort, land-support, or interception missions in any of six lake zones. Card and chit draws determine which enemy ships may deploy to the lake or stay in the shipyard to acquire more potent weaponry. The player draws a row of Target Cards, face-down. A side that reaches certain supply levels can launch certain ships from a shipyard, or have army troops readied to attempt more ambitious land operations. A final victory level is assessed at the end of the eighth turn; depending on the VP level, the game result can be a draw, or either side can win a marginal victory, victory, or decisive victory.