A World at War: Second World War in Europe and Pacific (3rd Printing) 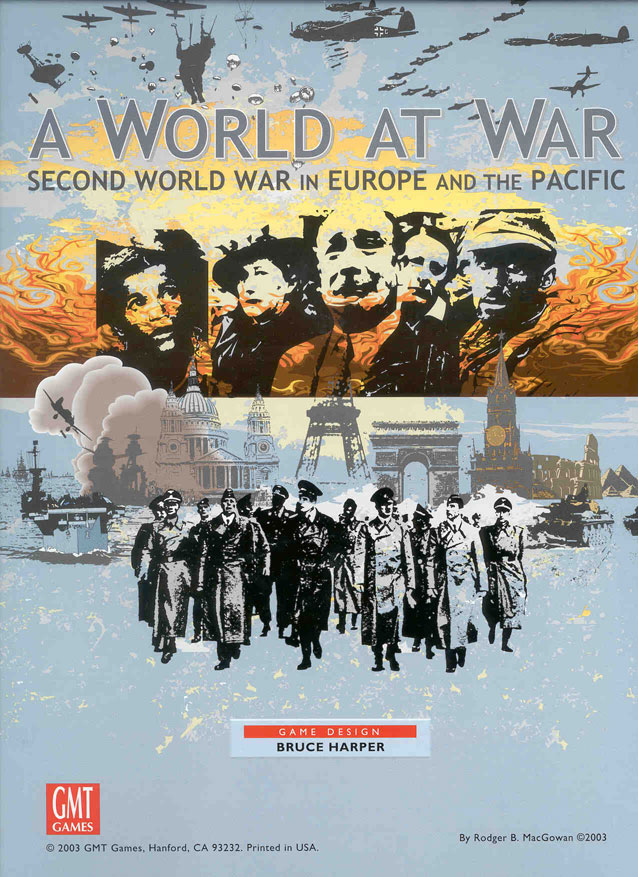 3rd Printing. A straight reprint of the 2nd Printing maps and counters, and will include the most current version of the rulebook and other components.

First published by GMT in 2003, A World at War is a grand strategy game based on the award-winning Advanced Third Reich/Empire of the Rising Sun gaming system. A World at War simulates the military, economic, political, diplomatic, research and production aspects of the Second World War and lets the players find out for themselves what might have happened if:

· Germany had tried to execute Sea Lion, the invasion of Britain.

· Admiral Raeder’s Mediterranean strategy had been adopted and the British position in the Middle East had crumbled.

· Russia had been prepared for the German attack.

· “General Winter” had not come to the aid of the hard-pressed Russian armies in late 1941.

· The European Axis and Japan had cooperated in implementing a strategy aimed at destroying the Western Allied lines of communication in the Indian Ocean.

· The Battle of the Atlantic had been won by Germany.

· Japan had avoided disaster at Midway in 1942 and instead invaded Australia or India.

· Japan had knocked China out of the war.

· the U.S had mobilized more armor units and fewer air units, or more infantry and less armor, or...

· the Western Allies had tried to invade France in 1943 or earlier, leaving Italy for later.

· The Western Allies had failed to develop the atomic bomb - but Germany had.

· the Western Allies had developed jets or rockets.

· YOU had been in command.

A World at War continued the evolution of the Advanced Third Reich/Empire of the Rising Sun game system, refining and clarifying the rules in every area of the game. Five years of design and relentless playtesting resulted in a polished, proven game, which includes the following innovations:

· naval construction rules which allow major powers to build the navy they think will suit their strategic requirements.

· mobilization rules which allow major powers to tailor their army and air force pools to meet their needs – provided they anticipate them accurately.

· oil rules which force the Axis to worry about their inadequate oil reserves even when victory is within their grasp – although Britain and Russia can have cause for concern as well!

· additional terrain on both the European and Pacific mapboards.

· revised counters based on feedback from A World at War players.

· rules changes to mitigate the effects of bad luck, especially early in the game, leaving it to the players themselves to ruin their positions.

· increased balance between the western, Mediterranean and eastern fronts.

· refined strategic balance in Russia, so that Russian survival is a challenge in most games – unless Germany doesn’t invade Russia at all...

· graduated economic growth rates and a link between Germany’s conquests and its construction rate, so that an Axis “Fortress Europe” strategy is as risky as any other.

· an enhanced Japanese Resistance Table, with Japan getting credit for expansion beyond its historical achievements.

A World at War contains a dozen scenarios, ranging from the introductory Battle of the Atlantic and Barbarossa scenarios up to European and Pacific Campaign Games. But dedicated gamers will be hard-pressed to resist testing their luck, skill and especially their nerves by taking on the entire war in the full-fledged Campaign Game.

For players who already own A World at War, a sheet of 280 new and revised counters will be available separately (We’ll add this item to the P500 list as we get nearer a print date). These counters are included in the complete second edition game.