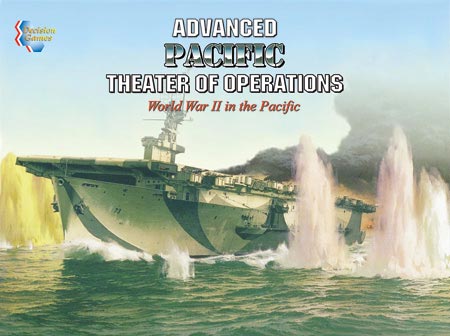 Advanced Pacific Theater of Operations is the most comprehensive game ever published on this topic, encompassing the entirety of the war in the Pacific. From the Japanese invasion of China in 1937 to the end of the war, the entire conflict is portrayed.

Like AETO, the forces in APTO are exactingly accurate and have been exhaustively researched. There's no guesswork; every piece is based on the most thorough study ever devoted to a wargame. It even features all the Soviet and Japanese forces that engaged in the Nomonhan Incident, along with the units of every nationality that fielded a military in the war. Indeed, this is actually a division-level game, and is even more detailed than the acclaimed AETO.

APTO and AETO can be linked to simulate the entire Second World War more accurately than any other game ever produced. This is more than an AETO supplement; though, in that it features special rules for: elite pilots, atomic bombs, midget submarines, coast-watchers, tropical disease and more.

Advanced PTO is the most realistic yet playable game on the subject; it includes admirals and generals, every type of aircraft and every capital ship that existed in the Pacific Theater, and even some refits. APTO represents the ultimate blend of playability and detail. In conjunction with AETO and also Africa Orientale Italiana (the East African expansion), no World War II strategic series has ever been so all-encompassing, detailed, playable and realistic.