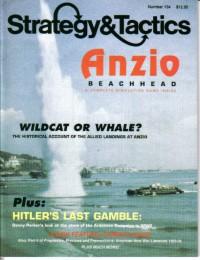 Anzio Beachhead is an operational level simulation game of the allied invasion of the Italian mainland near Rome during WWII. The invasion began January 22, 1944 under the codename Operation Shingle. It had the Alban Hills and the isolation of the German army as its objective. Failing in thse, Allied troops would have to hold until relieved. here Hitler reconized Germany's great chance to destroy an Allied invasion. had his troops succeeded in destroying the beachhead, the war in Europe could well have lengthened.

Anzio Beachhead is a two-player game in which one player controls the German forces while his opponent controls the Allied forces.