Yaah! Magazine: Poland Strikes!1960: The Making of the President, 2nd Printing
Back to: Other C20 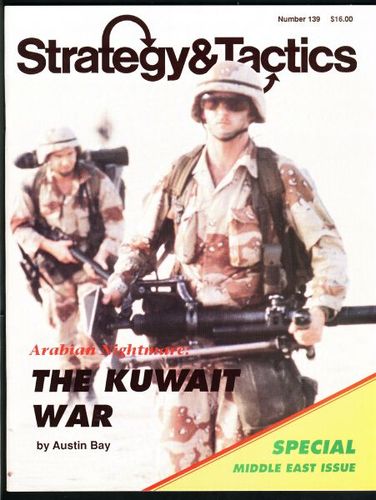 Arabian Nightmare : The Kuwait War (ANKW) was designed and published while the late 1990 events in Kuwait were still unfolding, so in effect it was a near-future game which became an historical game within a few months.

The game has one map and 300 counters. The map covers the Persian Gulf, Saudi Arabia, the eastern part of Iraq and its border with Iran. Scale is 1-3 per Military Action Segment and 4-6 days per Political Action Segment Segment (a full turn is 2 MAS and 1 PAS, so 6-12 days total). Units are ranging from batalions to corps, naval squadrons and air wings.

The game may be played using only the Military rules, the Political rules or both sets. There is an Introductory Game as well. There are 7 scenarios including the full campaign.

An expansion kit for ANKW called Desert Sword was published separately in 1991, adding a new map covering the western part of the Middle East to the shores of the Mediterranean plus 200 counters. The kit includes the historical Coalition offensive vs. Iraq.

This is a medium-high complexity game with many creative mechanisms and special rules. For the experienced wargamer.