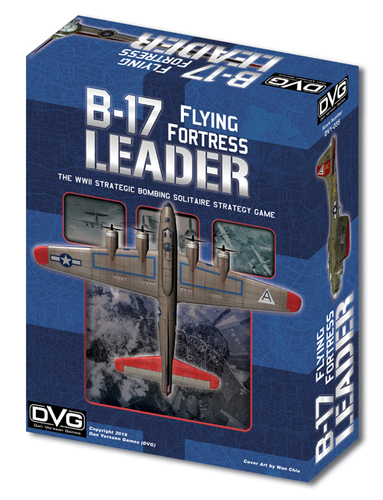 In B-17 Leader, you are in command of the Eighth Air Force stationed in England, charged with reducing Germany's ability to wage war. Your primary mission is to destroy the Luftwaffe to ensure a successful D-Day landing, but multiple secondary missions are also required to help advance the fronts in multiple theaters.

You will have multiple historic Bomber Groups composed of B-17 Flying Fortresses, B-24 Liberators, and B-26 Marauders. Optional B-29 Superfortress and B-25 Mitchell Bomber Groups are included. Your Bomber Groups will be protected on their journey in Luftwaffe controlled airspace by Fighter Groups composed of MK VII Spitfires, P-47 Thunderbolts, P-38 Lightnings, and P-51 Mustangs. Your groups can progress in experience levels from Newbie to Ace, but may be Reassigned as they gain experience. Optional Renown Commanders provide groups with special skills and tactics, but could be killed during the Campaign.

You will be targeting many different types of targets, including Airfields, Aircraft Factories, U-Boat Pens, Ball Bearing Factories, Oil Refineries, and V-Weapon sites. Recon Aircraft can be sent to improve your aim point and allow you to pick the optimal path to reduce Flak damage.

Various German Defense Commanders will try different tactics and technologies in an effort to stop your campaign. Each German commander will also have a varying range of Luftwaffe responses to your attack, from Poor to All Out.

To help mitigate the Luftwaffe threat, you can accomplish Secondary Mission objectives that can advance the Mediterranean and Russian fronts to force Germany to send more Luftwaffe Squadrons into those theaters. You can also purchase various technologies to increase the odds of a successful mission, like Drop Tanks, Jammers, and H2X Radar sets. An option to invest and field the P-80 Shooting Star jet fighter is included. Once the Allied Invasion has begun, many Secondary Missions will help advance the Allies to Berlin to end the war.

Your Bombers will take damage and be destroyed, but monthly Replenishment units will help bring your groups up in strength.

If you have played other Leader Games, many aspects of B-17 Leader will be familiar. But due to the Strategic nature of your bombing campaign, new gameplay aspects are introduced.