Available for Pre-Order. At the printer.

Most authors relegate the Battle of White Plains to a short paragraph when recounting the New York Campaign of 1776. As the last field battle of that campaign, however, it deserves closer study. Volume 10 in GMT’s award-winning Battles of the American Revolution series by designer Mark Miklos provides such a much-needed analysis. 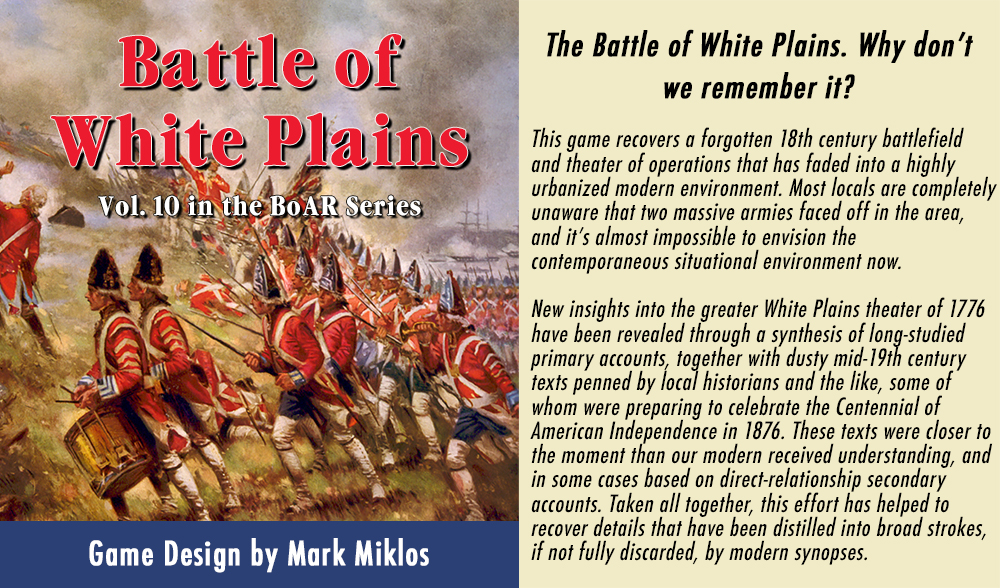 History
As it occurred, the Battle of White Plains could properly be called the Battle for Chatterton Hill. This relatively limited affair, fought on the American right flank on October 28, 1776, was the only set piece action between the two protagonists. Here some 4,000 British and Hessian troops attacked fewer than 2,000 Americans with the King’s forces ultimately prevailing.


The main armies, however, were enormous for the period with 14,500 Americans confronting 13,000 British and Hessians who were eventually reinforced to 15,400, making this one of the largest concentrations of opposing troops during the war and the largest game in the Battles of the American Revolution series to-date. Yet despite this concentration of forces along a front barely three miles wide, the armies sat primarily idle after the fight for Chatterton Hill while the British probed at the flanks, and the Americans improved their defenses.


Washington had chosen a strong position which he fortified with two concentric lines of fieldworks that bristled with forty guns. His flanks were anchored on high hills and further secured by the Bronx River to the west and swampy wilderness to the east. Secure in these positions, Washington welcomed the prospect of a frontal assault against his works.


For his part, General Howe’s reluctance to launch a frontal attack was due in part to his having witnessed the Battle of Bunker Hill in June, 1775, the memory of that slaughter still fresh in his mind. The weather at White Plains was also a mitigating factor with cold autumn rains falling for much of the week during which the armies remained in contact. Finally, Howe’s own proclivity to hesitate when decisive victory was within his grasp further exacerbated any plans for a major British assault.


Washington reacted to the loss of Chatterton Hill by initially refusing his right. Sensing the growing weight of the British host, he eventually swung on a hinge leaving his left where it began, on Hatfield Hill, while pulling the rest of the line back approximately two miles to even higher ground in the North Castle Heights where he dug new fieldworks. Like two heavyweights maneuvering to shorten the ring, each sought an opening—Howe to press the attack on favorable terms and Washington to receive the attack on fortified ground of his choosing.


Ultimately reinforced by Lord Percy with six regiments plus some newly-arrived Hessians and having discovered no viable way around the flanks, General Howe determined to attack Washington frontally on the morning of October 31. He stood his men to arms at 5:00 am but driving morning rains cooled his ardor and the army was again ordered to stand down.


There was more probing and some long range artillery fire against the American flanks on November 1 to no great consequence. Howe now believed he was facing only an American rear guard in the North Castle Heights lines and saw no value in attacking it, believing that Washington with his main force had already evaded him by marching further north. The armies, therefore, sat staring at one another until November 5-6 when General Howe elected to turn south to complete the conquest of Manhattan by capturing Fort Washington which he did successfully on November 16. As Howe turned south, Washington turned north. He divided his forces into three groups. Major General Lee was to screen the approaches to New England while Major General Heath was to guard the Hudson Highlands and points north. The commander-in-chief with the balance of the army crossed the Hudson River at Peekskill and marched south through New Jersey to stay between the British in New York and the American capitol at Philadelphia.
Throughout the White Plains campaign, the prospect for a decisive victory was ever-present. The fact that it didn’t occur is a fascinating story.
Research

White Plains is among the least written-about battles of the American Revolution, an oddity when one considers the scale of forces engaged. Most secondary sources give it a passing mention in the larger discussion of the New York campaign while among the scant primary sources there is considerable disagreement as to key details. Source maps are scarce and often contradictory as well. To bring you Volume 10 in the Battles of the American Revolution series, exhaustive research was conducted in the sources and on the ground to bring to life the most accurate battlefield map possible.


Likewise the order of battle was painstakingly reproduced from scraps of information: memoirs, General Orders, casualty lists, pension records, compilations of the Westchester County Historical Society, journal articles, Blogs, secondary-source histories, firsthand accounts, and a little intuition. As usual when studying the American Revolution, British records are more complete. American records less so. Where specific unit placements are known the corresponding units are placed accordingly. Where specific deployments are not known, deployments are notional but stand up to the litmus test of brigade and divisional integrity.


The Game
The game includes three scenarios: the historical fight for Chatterton Hill, an October 31 scenario that explores what might have occurred if Howe had pressed his grand assault that day as planned, and a full four-day campaign game spanning 42 game turns beginning with the arrival of the British army on the field on the morning of October 28 and culminating at 5:00 pm on October 31.


Each player has 26 Opportunity Cards subdivided into three decks to enhance play and add elements of variability and historical flavor. As with previous games in the series, some special rules represent the unique circumstances of this battle. Among these are rules governing American sortie restrictions and tactical doctrine, rain game turns, restoring army morale, scorched earth, and additional handicaps for American militia, American fieldwork construction, and an off-board movement mechanism for Tarrytown on the Hudson River, seven miles away where British ships lay at anchor. Even Washington’s own combat prowess at this early stage of the war is randomized.

In Volume 10 of the Battles of the American Revolution series, players command two titanic armies: Washington, desperate to salvage something from the otherwise disastrous defense of New York, and Howe seeking a coup de grâce against the “Old Fox.” You will have to manage your forces over the span of four days with lots of inclement weather to contend with. Can you, as General Howe, break through the American line to deliver a decisive blow and end the rebellion? Can you, as General Washington, hold your own on superior ground, hampered as you will be with some 6,700 militia of dubious quality—fully 46% of the total American force?