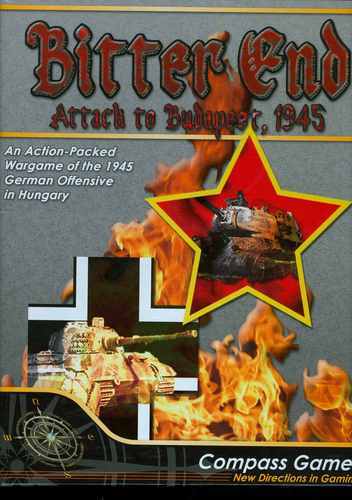 Excellent punched copy, content is bagged/sorted and well looked after by previous owner, box only has minor ware to it.

Bitter End: Attack to Budapest, 1945, is an operational-level simulation of the German attempts to relieve the encircled Hungarian capital of Budapest, besieged by Soviet forces, in January 1945.

79,000 Axis troops belonging to the IX SS Mountain and 1st Hungarian Corps are surrounded and being pounded by two Soviet armies, the 46th and 7th Guards. The situation is grim. The Soviets are well- supported by heavy artillery and the German line has been steadily retreating, leaving Budapest in grave danger.

On January 1st, the German IV SS and III Panzer Corps launch a surprise attack to rescue the defenders and recapture the city. By January 12th the attack is stalled in the rough terrain to the west of the city. Hitler shifts the focus of the attack from the west to the south-west and continues the attack on January 18th. Although progress is made, Soviet reinforcements pour into the area and the offensive grinds to a halt.

Hitler calls off the attack at the end of January, and by February 14th, after seven weeks of grueling combat, Budapest falls.

By January of 1945 Nazi Germany_s military fate was sealed. There was nothing the German forces in Hungary could have achieved that could have substantially delayed or even mitigated this defeat. That did not deter the German attempt to relieve Budapest. Hitler_s goal in ordering the attack toward Budapest was not the rescue of its garrison, but rather the recapture and retention of the city. The garrison was in fact ordered not to break out but instead to hold and await relief. Few commanders on the German side took the idea of the retention of Budapest seriously, however. Had the relieving German forces gotten to within a few miles of the city, a breakout attempt would probably have been made. Bitter End lets the players explore the tantalizing possibilities. In addition, players may test their skills with several viable historical alternatives, such as the inclusion of forces that could have been available to the respective commanders.