Central Command: Superpower Confrontation in the Straits of Hormuz 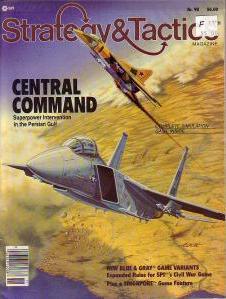 Simulation: Central Command C. Kamps
The Central Command Game simulates potential warfare between the US and the Soviet Union over the critical area of the Strait of Hormuz sometime during the late 1980s.

The game concentrates on an hypothetical land and air campaign for possession of airfield and port facilities in Iran that could dominate the critical outlet for Watern oil supplies from the Persian Gulf. It is assumed that other forces may be involved in combat elsewhere in Iran at the same time, limiting ground and air unit participation around the Strait to the forces included in this game. These off-board forces are assumed to be engaged in naval, naval/air, offensive counterair, or deep interdictional operations beyond the limited time frame of the game.