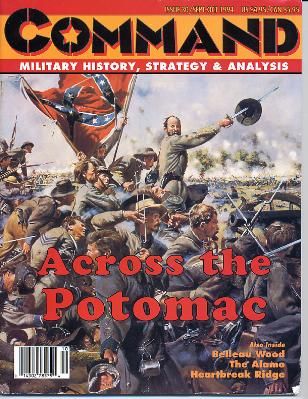 Across the Potomac is a simulation of the 1863 Gettysburg campaign during the American Civil War. The Confederates were at the height of their military capabilities and were looking for a quick way to end the war by aiming at Washington. The battles of Brandy Station, Second Winchester, and Gettysburg were fought during this campaign.

The game system uses a double blind system. One player takes the role of Gen. Robert E. Lee, the other acts as Maj.Gen. Joseph Hooker (until June 28th) and then Maj.Gen. Geore G. Meade. Movement determined by command points which is determined by quality of leaders. Rules include the variables of replacing Hooker with Meade. There are two identical maps with each player having one and hidden from each other. Players will need to search out the other's army by using cavalry and pickets. Victory is determined by destroying enemy units and capturing or defending real estate. Two additional scenarios: The Great Invasion (starting on turn 14), and Lee vs. Meade. Optional rules cover Rain, Bridge Burning, Naval Movement, Piccett Goes West, and Reynolds Takes Command.

A complete game will take about four hours to play, but the additional scenarios can be finished faster.

125 counters, two 17"x22" maps, two sheets for battleboard and Turn Record, 14 pages of rules. One six-sided die and one ten-sided die is needed to play.