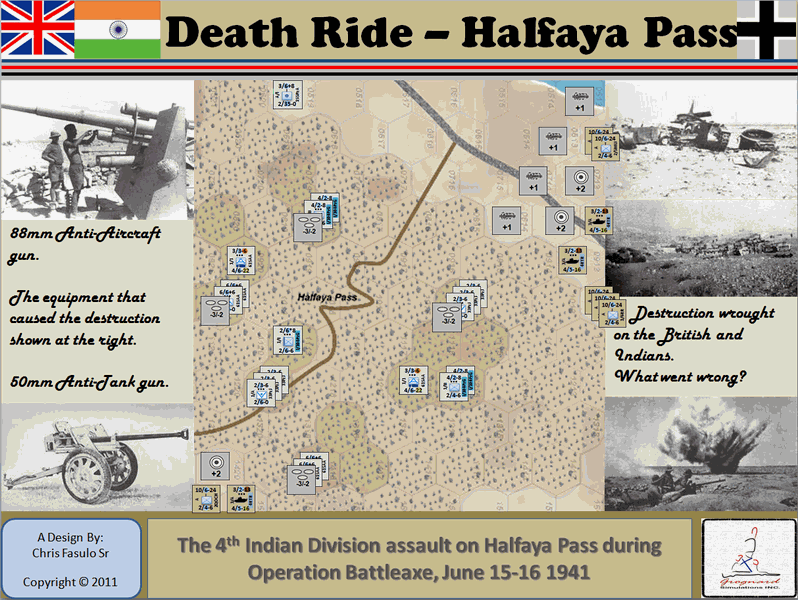 Another small introductory game set in the desert in 1941 during Operation BattleAxe that has the British attempting to clear the Halfaya, or "Hellfire", Pass.

A sample part of the DR - Halfaya Pass map

Halfaya Pass is another small GSI offering. The game focuses on tactical level combat and maneuver during Operation Battleaxe prior to the Crusader operation that lifted the seige of Tobruk. This is a stand alone game and does not need any other GSI title to be played.  It is slightly larger than Hafid Ridge in terms of the number of units and can be played in a relatively short time.

The rules are modeled around the seven battlefield operating systems which make them easily understood and easy to learn.

This battle will provide a challenge to both players.  The British will find that they need to be very aggressive to push through the anti-tank defense.  The Germans have to simply hang on.  Either way it's a cliff hanger.  The British Matilda's are the queen of the battlefield, until they meet the 88's.  Obstacle play is important and significant.

Game play is excellent for solitaire play and moves along very quickly.  The game is specifically designed to play in a day.

The Commonwealth forces were made up of 3 infantry battalions and a squadron and a half of Matilda tanks, heavy but undergunned and underpowered.