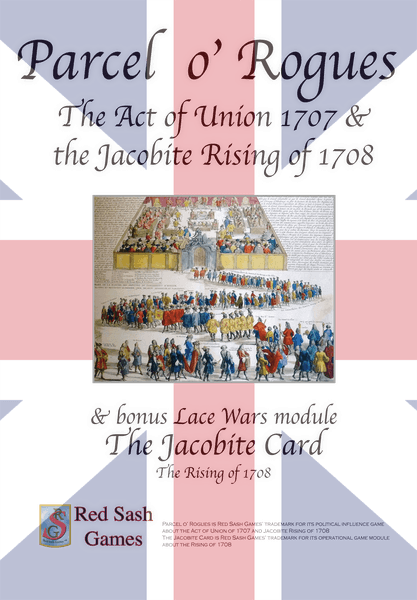 Parcel o' Rogues (POR) has been designated the fifteenth volume in Red Sash Games' Lace Wars series. Technically speaking, the game should not be part of the series. It is a completely different animal, and no knowledge of the Lace Wars series is required. However, the package also contains a Charlie's Year module, The Jacobite Card (TJC), which is part of the series and completes the Jacobite 'saga'.

POR is a game for 2-4 players that covers the political struggle to pass the Act of Union of 1707 which brought England and Scotland under a single government. For a hundred years the two countries had been ruled by the same monarch, but with separate governments and laws. The Union was in keeping with the centralizing trend that could be found all over Western Europe. As might be expected, it was not universally acclaimed, especially in Scotland. Coincidentally, a Jacobite rising was being planned in coordination with the French, who were (of course) at war with England and hoped to create a diversion that would draw enemy troops away from their frontier. This plot played into the widespread discontent with the Union, so that when a French expeditionary corps was dispatched to escort the Old Pretender, James Francis Edward Stuart, to Scotland in March of 1708, the conspirators could count on a massive uprising in support of his claim to the Throne. Unfortunately for them, the plan quickly unravelled due to a variety of causes and the famous Rising of 1708 that restored Scotland's independence never happened.

In POR the object is to gain influence over the key political figures and institutions who can sway the vote for Union, or, if necessary, provide resources for a rebellion. Influence is claimed by the placing of cubes on a board, at locations representing the various personalities and institutions involved. The players are limited in what they can do on their turn by card play, which stipulates how many cubes are available and what sort of locations will accept them. Cards may instead allow players to remove some of their opponents' cubes. Periodically, event cards must be played that affect everyone; these cards also act as a timer. There are two scoring rounds. In the first, the players compare their influence for the Act of Union. If there is no Union, the game will be over, but usually, the Union does occur and the game continues to the second scoring. This one determines who has won the subsqeuent Rebellion and uses different criteria (but the same game mechanic).

If desired, the results of the game can also be used to generate a scenario for the attached Lace Wars module, The Jacobite Card. The final state of the POR board will dictate the resources each player receives for that scenario.

Playing time averages 3 hours, regardless of the number of players.

1) Play board showing the personalities and institutions involved in the events covered by the game.

2) 120 die cut counters. Half are used as tokens and markers in POR. The other half are used in TJC.

3) 121 playing cards. 90 are Action cards, used to make plays during the game. 20 are Season cards which provide special events and act as a timer. The remaining 11 cards are Aide Memoires.

5) Rules for both POR and TJC.