Yaah! Magazine: Shadows in the WealdAncient Kings
Back to: Fantasy

Hero: A game of adventure in the catacombs 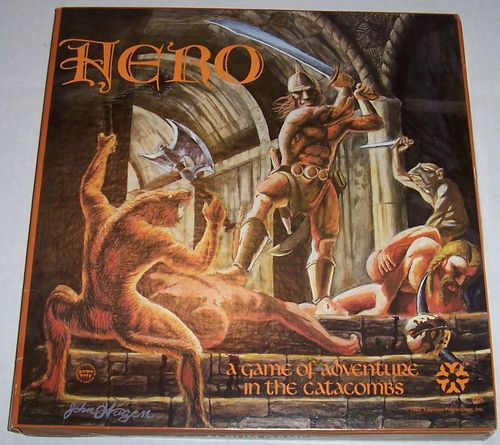 Very good condition unpunched copy, still in shrink wrap (Thin album box). Due to long time storage this have suffered from foxing and are musty.

Hero is a wild, no holds barred man-to-man (or beast) game on two levels. Players control their own Hero in their portion of the maze as well as monsters in their opponents portion. Each Hero is composed of several categories: Intelligence, Physical Appearance, Class, Strength, Luck, Hits, and Weapons Proficiency. Each of these must be determined by the player from a fixed number of points. To make a Hero super-strong will mean that some other category must suffer (super-strong and a lackwit?). Monsters include such loathesome creatures as trolls, ogres, zombies, goblins, lycanthropes, men, and the horribly alluring succubus. Each has an offensive potential as well as a defensive capability based on the type of creature vs. the Hero's weapon and how mightily he wields it. Your Hero must avoid traps, slaughter monsters, gather gold, and make it to the end of the labyrinth to win the hand of the stunning, voluptuous daughter of the most powerful wizard in the land. If the Hero does not there are always other challenges, unless he has become a Dead Hero.