Iron Sky: The Board Game 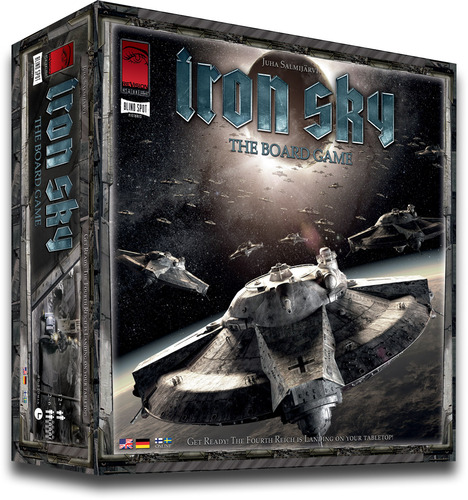 In 1945 the Nazis went to the Moon; in 2018 they come back with a vengeance! Get ready, for the Fourth Reich is about to land on your table!

Iron Sky: The Board Game is based on the full-length feature film Iron Sky, a dark sci-fi comedy set in the year 2018. The Nazis have completed the construction of a massive invasion fleet of flying saucers and space zeppelins, and arrive at Earth's door with only one thing in their mind: total world dominance!

Iron Sky: The Board Game puts players in charge of the most epic battle of all history. The objective is to gather as many victory points for your side as possible. Both the attacking and defending players are in command of a specific sector of the battlefield, and each player is awarded with a personal score based on how the battle fares – but no one commander can win the whole war. The players need to help each other out of tight spots, for each commander has a different area of expertise, with weaker proficiency in other areas. Only by working together can the players prevent the enemy from exploiting these weaknesses, and only by working together can they bring the enemy to their knees!

In addition to mixing cooperation with competition, the core of the gameplay ensures that the players practically have no downtime at all. You are either attacking or defending all the time, eliminating the need to wait for your turn.

Iron Sky: The Board Game takes a different approach to the universe of Iron Sky. The movie may focus on the main characters, but the board game gives players direct control over the whole global war effort – and there's no way of knowing which side will emerge victorious. Lock and load – the Moon Nazis are coming!