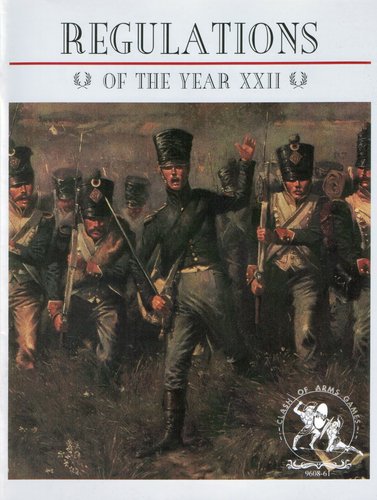 In 1975 Larry Groves and what was then known as Martial Enterprises won the Charles Roberts award, Best Amateur Game, for their release of La Bataille de la Moscowa. Next, in 1977, a rechristened Marshal Enterprises released La Bataille D' Auerstoedt refining the rules. Then in 1984 Clash of Arms Games acquired the series; polishing the rules yet again with a third edition in 1990. Seven years have passed... And still you thirst for glory?

Grognards! with this new tome, our Regulations of the Year XXII, we will sweep the plains of Saxony clear of our detractors. Despots linger still in Iberia. Across the Alps dilettantes, aided by the cause of universal serfdom, plunder the rights of freemen in the rich valleys of the Po. The Danube is once more a river of deceit!...while the hideous leopard, grown fat in the security of Perfidious Albion, again threatens La Patrie!

We have dealt these craven curs their just desserts on the snow swept fields of Preussisch-Eylau. You were superb when we defeated them at Corunna, then at Talavera, and once again at Albuera. Your efforts at Ligny, Les Quatre Bras, and Wavre were in keeping with your traditions. And at Mont St. Jean ... you were sublime.

Clasp these pages close to your breast. Knit them along with your honour beside your hearts. Pledge your lives to them! Swear to uphold them! Let them lead you to victory!

WARNING: These rules are more suitable for advanced players.
Suitability for Solitaire Play: Much more so than in previous editions.
Extensively Illustrated Examples of Play are included
Compatible with all previously published La Bataille titles