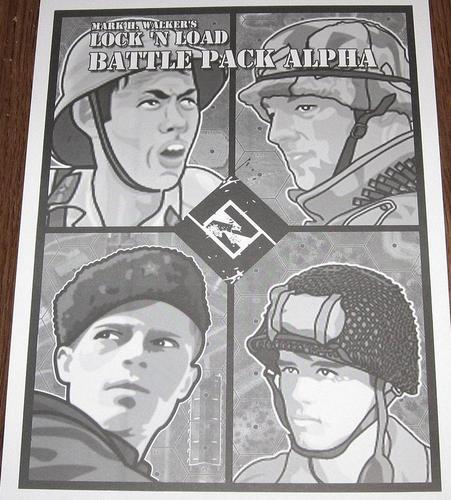 The first scenario pack for Lock 'n Load.
Includes twelve new scenarios on cardstock, just like those included in all other Lock 'n Load games.
Scenarios for Forgotten Heroes, Band of Heroes, Swift and Bold, and Not One Step Back.
12 scenarios in all (see below for details), ten designed by Dale Holmstrom (scenario designer for NOSB and Swift and Bold), two by Mark H. Walker.

Of Mines and Men: While a platoon of Marines supported by Am tracks are patrolling a mine-infested area, they are ambushed by the Viet Cong. Can they vanquish their hidden foes?

The Road to Astrachan: An elite German long range reconnaissance group is sent to far reaches of the Caspian Sea, but can it survive a Russian gauntlet as it enters enemy territory?

Fortress Breslau: A mixed-bag of German units bravely defends the beautiful city of Breslau against a Russian onslaught.

Undaunted Courage: On the outskirts of the Nijmegen, American paratrooper John Towle takes on a concerted German counterattack.

In the Ghetto: Refusing to be rounded up for the concentration camps, Jewish partisans defiantly defend their turf from German aggressors.

An Apple Cart for Jerry: British Paras defend a Landing zone outside of Arnhem using some innovative measures.

One Last Blitz for Old Time’s Sake: On Hitler’s orders, a refitted panzer battalion makes a final assault against a Russian bridgehead.

The Brickyard 150: British Paras attempt to open a route to relieve their own at the Arnhem Bridge.

Three Companies at Dak To: A scenario drawn from the pages of the famous Seven Firefights in Vietnam. NVA attack a company of American infantry entrenched on a hill.

Tip of the Speirs: Easy Company of the 506th Regiment, 101st Airborne Division is tasked with taking Foy from the Germans. Their commander falters, and Lieutenant Speirs steps in.

Teamwork: Outside of Bastogne, elements of the 101st Airborne try to mount a coordinated defense against Panzer Lehr.