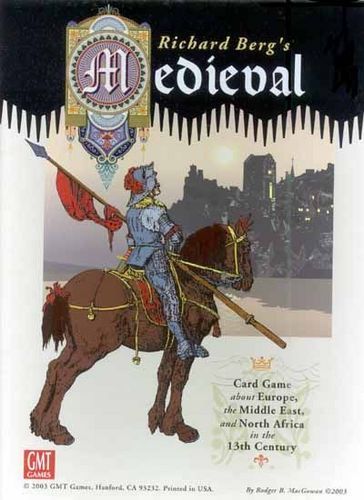 Medieval is a card game for 3-to-5 players covering, very loosely, the events, situations, and rivalries of the 13th century. Medieval uses the EnigmaTM system, in which the playing map is represented by cards, not all of which are present at start.

The 13th century saw the Papacy at the peak of its power, the Holy Roman Empire struggling to remain cohesive, England under the turmoil of baronial revolts, the emergence of monarchial France, the Teutonic Knights looking to extend their powers, Venice controlling the seas of the Mediterranean, Spain continuing the Reconquista, while Islam started its rejuvenation process under the Mameluks. And then there were the Mongols.

Each Player represents an ever-changing conglomerate of these Powers, using his wiles, and the cards, to further his control over areas of Europe to win the game. There are Spies, Assassins, accusations of Heresy, Jihads, even the use of the various Knights of Christ.

And then there are the Popes. Each player, randomly, can become Pope. As Pope he can arrange alliances, excommunicate players, and call for Crusades.

But, hovering like a very, very black cloud over all of this are The Mongols. No player knows exactly when they start to arrive, although the card play does give them hints, and some time to prepare, if they choose to heed the warnings.

The winner is the player who survives the onslaughts of religion and the Mongols to control the largest part of the 13th century Europe.