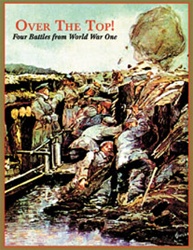 Box has suffered some minor compression from long term storage. Remains in shrink-wrap.

Brusilov Offensive, 1916. The Russian army fights its way through  the Central Powers' trench system only to be stopped by a desperate  German counterattack.

Damascus, 1918. British Gen. Allenby, with assistance from Lawrence of Arabia, surprises and outmaneuvers the Ottoman army in the Middle East.