Storm Over Asia: Prequel to A World At War

Storm Over Asia is both a companion game to GMT’s A World at War and Gathering Storm, and is a game in its own right, with its own victory conditions. Starting in 1935, Japan, China, Britain, and Russia prepare for war without being sure of just what is coming. Japan must balance its expansion in China, an impending confrontation with the United States and Russia, and the impact of the Pacific theater in a global war. China, Britain, and Russia must try to resist immediate Japanese expansion, while at the same time laying the groundwork for the successful prosecution of war in the Pacific. These short-term and long-term goals will often be in conflict, and misjudgments in either direction may have dire consequences.

Storm Over Asia allows players to explore what might have happened if: 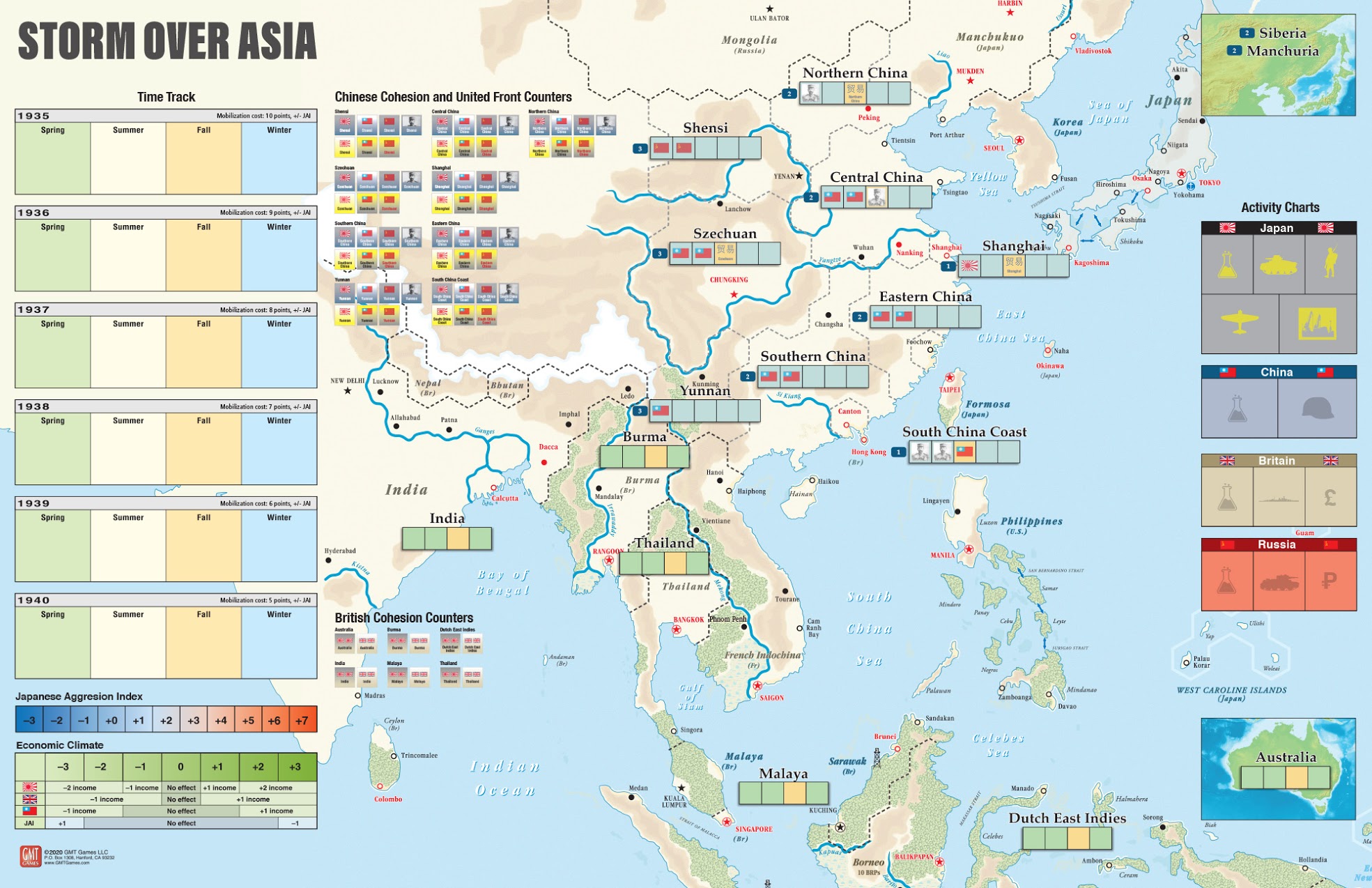 Storm Over Asia may be played as a separate game in a single session, with its own victory conditions, and may be played alone or in tandem with Gathering Storm, GMT’s pre-war game in Europe. Storm Over Asia resembles Gathering Storm in many ways, and both games have a structure consistent with A World at War, allowing for a seamless transition to whatever alternate war the players planned – or stumbled into. There are many similarities between Storm Over Asia and Gathering Storm, and Gathering Storm players will have no difficulty in playing Storm Over Asia. There are also differences between the two games, such as the mechanics for combat in China, and coordinating Japanese and European Axis strategies is perhaps even more challenging before the outbreak of war than it is during A World at War (especially in turns where China draws a random event invoking “German advisors” as the reason for increased Chinese combat abilities). Storm Over Asia includes the following:

A World at War players will naturally want to press on after playing Storm Over Asia and see how the war they have created plays out in the Pacific theater.

Storm Over Asia is a must-buy for any committed A World at War and Gathering Storm player, and is an excellent – and possibly dangerously time consuming – introduction to the A World at War universe for those unfamiliar with that game, and a enjoyable and instructive fast-paced game all on its own.

What Players Are Saying

As a frequent player over many years of GMT's "A World At War" and "Gathering Storm", and as a play-tester for "Storm Over Asia", I have been very impressed with the depth of this new game focused on the Pacific Theater. It provides superb historical context for the very different starting situation in 1935 as compared to Europe. The "problem of China" dominates Japanese planning, but they cannot ignore preparations for the greater conflict to come in AWAW. The historical context in China concerning a little known period for most Western game players is amazing. It is a true window on that period of history without sacrificing playability. A difficult balance but very successfully accomplished! The similarities with Gathering Storm are striking. However, there are differences in the game play, such as the "United Front" between the Communist and Nationalist Chinese that accurately reflect the differences in the situation. Although, I am biased by the depth of effort exerted by Bruce and other developers, anyone who enjoys the Pacific Theater in AWAW MUST play Storm Over Asia!"