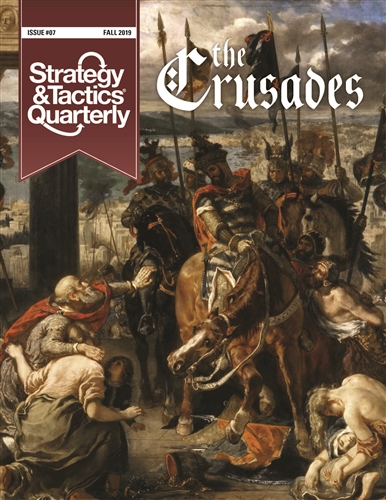 Please Note: This version does not include the Map Poster, as the Mag&Map version is now a publisher exclusive.

Crusades: Europe was nearing the peak of the High Middle Ages in the late eleventh century. A growing population supported not only rapid expansion of arable land, but the growth of cities that in turn fostered trade and the arts. The continent began looking outward, nowhere more so than the Levant, where Islamic expansion had subsumed much of Classical Antiquity. In a bid to unify squabbling dynasties, Pope Urban II announced a Crusade to recapture the Holy Land. It was the first of more than a dozen calls that would span four centuries, sending expeditions of knights errant to the corners of the Mediterranean and Baltic worlds. In addition to massive cultural changes, the wars had an enormous impact on the conduct of warfare. Joseph Miranda covers that impact in the context of the period's battles and campaigns. The magazine is richly illustrated with maps, diagrams, weapons, and images of people and events.